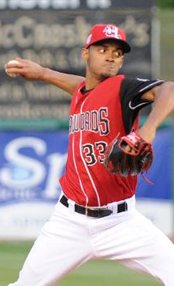 Baseball America named Hernandez its Pitcher of the Year for all of High Class A in 2018, but his work in the second half with AA Frisco might have been the most encouraging aspect of his season. The son of former big leaguer Fernando Hernandez was dominant in 10 starts for Down East (77 strikeouts and 17 walks in 57.1 innings, holding opponents to a .184/.251/.303 slash line) before a mid-season promotion to Frisco. Through eight RoughRider starts, he consistently fell behind in counts and issued 26 walks in 40.1 innings, allowing 32 earned runs (7.14 ERA) on 45 hits (.287/.394/.439). But then August arrived, and in Hernandez’s final month he was a different pitcher, looking more like he had with the Wood Ducks. In 23.2 innings, he scattered 13 hits and 10 walks (.167/.270/.244), striking out 27 and allowing just three runs (1.14 ERA). Hernandez sits in the mid-90s with a deceptive crossfire delivery and the ability to reach back and get to 99 MPH. He complements that fastball with a slider that misses bats when he hits his spots, a changeup that’s still improving, and a curveball he hasn’t relied on much. The 22-year-old has a history of struggling at a level (typically a function of command issues with his fastball due to the noisy delivery) but then making adjustments, and his experience in the Texas League epitomized that. He’ll likely return to Frisco in April, looking to build off his finish to 2018 in a year when Texas is likely to give several of its young pitching prospects the opportunity to make Major League starts. It wouldn’t be unusual for Hernandez to scuffle a bit when he gets his first big league look, but in his case it wouldn’t be overly discouraging. He has proven that he can adjust.