1B Dean Long, 2B Leon Byrd, OF Diego Cedeno, OF Jesus Martinez, OF Doug Votolato 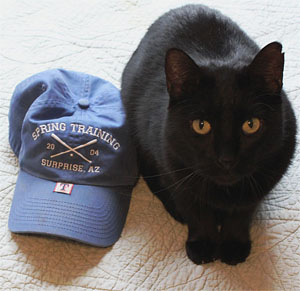 For the next five months, you’ll receive my daily recaps and commentary on nearly 700 minor-league games (weather permitting).  Every year, I offer a primer on the structure and quality of minor league ball to aid your understanding and enjoyment of the games and my reports.

Winning Is NOT Job One

The organization wants to create a winning environment, and the players certainly play to win, but winning is secondary to player development in the minors.  Rosters aren't arranged and games aren't managed to maximize wins.  Roster composition is a complicated and sometimes contradictory assortment of goals: challenging some players, nurturing others, clearing logjams (Brinson in Frisco, for example) and filling holes.  The ultimate purpose is to maximize the likelihood of prospects reaching and succeeding in the Majors.

In July 2014, high-A Myrtle Beach had the best team in the Carolina League and were destined for a a playoff appearance by capturing the first-half division title.  A win-first mindset would have kept Jorge Alfaro, Nick Williams and Andrew Faulkner there all season for a run at an elusive championship.  Instead, all were in AA by the time postseason began.  (Myrtle Beach reached the finals without them but lost three games to one.)  Last fall, Round Rock's postseason roster included Lewis Brinson, Nomar Mazara, Drew Robinson, Ryan Cordell, Pat Cantwell, Alex Burg, none of whom had more than a month of regular-season experience at the level.  Chi Chi Gonzalez was pulled after two innings in his only start because the front office wanted him to get exactly that much work in.

The quality of a farm system doesn't correlate to a winning minor-league record.  High-quality prospects constitute only a modest percentage of the entire farm.  Winning depends just as much on "organizational soldiers" and offseason additions as prospects.

For an extreme example of the lack of connection between winning and prospect quality, witness the 2005 Frisco Roughriders.  That squad contained 11 pitchers who logged at least 40 innings and were originally signed by Texas or acquired as prospects.  They combined for a 4.86 ERA, and the team finished a league-worst 58-82, yet  10 of those 11 pitchers eventually reached the Majors:  C.J. Wilson, Scott Feldman, John Danks, Edinson Volquez, Nick Masset, Josh Rupe, Wes Littleton, A.J. Murray, Jesse Chavez and Thomas Diamond.

Early in the season, especially at the lower levels, starters will be limited to around 75 pitches and work up to 90-100.  Older starters (who are notably absent from Round Rock this April) have more leeway.  Don't be surprised to see young Hickory starter Jonathan Hernandez drop into the bullpen in July, even if he's pitching well.  He's not going to throw 150 innings.  Some healthy starters will miss a turn in the rotation as we approach midseason.

Conversely, workload management doesn't necessarily mean a quick hook.  Starting pitchers are there to get their work in.  Situational relief is far less common than in the Majors (as are mid-inning pitching changes, happily).  In the minors, unless the starter has a 30-pitch inning or is clearly getting hammered, he's going to reach his dictated number of innings or pitches.  As such, you'll sometimes see starters left to fend for themselves in situations that would ordinarily call for a reliever.

Likewise, reliever usage is scheduled more than dictated by game situations, particularly early in the season and at lower levels.  Single-batter appearances are rare, as are consecutive-day outings.  Pitching three days in a row is almost unheard of.  A team's closer isn't necessarily the brightest relief prospect.  He could just be the most trustworthy, and several relievers may share closing duties.  MLB-type relief patterns are more common in AAA, where relievers are older and/or getting acclimated to consecutive outings.

They're not necessarily optimized for scoring runs.  A guy with a .275 OBP might lead off if he profiles as an MLB leadoff hitter.  Sometimes good prospects hit lower than seems reasonable, perhaps to take pressure off of them.  Don't sweat the batting order.

Miscues increase dramatically down the minor-league ladder.  Rookie-league players make over three times as many recordable mistakes (errors, hit batters, balks, wild pitches, passed balls) as those in the Majors: 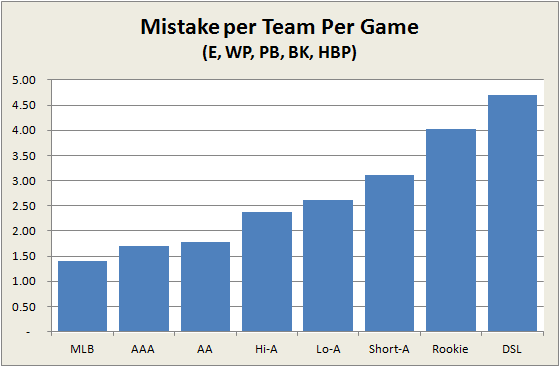 The key word is "recordable."  At the lower levels you’ll also see many more overthrown cutoffs, ill-advised throws that allow runners to advance, botched rundowns, and misplayed balls that don't fit the technical definition of an error.  I don't mean to suggest the low-level guys are inept.  Far from it.  Major Leaguers are just much, much better.  They're precision-tuned robots, comparatively.

They’re rare in the minors, exceedingly so at the lower levels.  The Rangers issued one freebie per 5,5 games last year, while their entire minor league system issued one per 25.  At the lowest levels, they're virtually non-existent.  Joey Gallo, of all people, has a higher IBB rate in the Majors (1 per 41 plate appearances) than the minors (1 per 126).

Pitchers may dance around feared hitters -- Gallo saw very few hittable pitches by the end of his time in Myrtle Beach -- but most of the time they're supposed to attack their opponents, regardless of the situation.

At the lowest levels, unintentional walks are more common, and hitters don't produce as much power.  You rarely see high slugging percentages in Arizona's rookie league like in Spring Training and the Arizona Fall League.  Most of the young hitters haven't reached physical maturity.

Those are the park-adjusted league averages for each team.  High Desert sticks out, doesn't it?  A pitcher with a 4.75 ERA there is doing reasonably well but is well below average at any other location.  As a team, High Desert allowed 5.88 runs per nine innings (earned and unearned), which sounds awful unless you know the average is 6.02.

Throughout the Cal League, not just in High Desert, you can find players who batted .300 with 25-30 homers and then didn't hit a lick in AA.  It's just a weird environment.

Conversely, some capable pitchers in High Desert have their seasons ruined (statistically speaking) by a couple of terrible outings.  Ryne Slack made 29 appearance at High Desert.  In 28, he had a 3.18 ERA.  Allowing nine runs in 1.1 innings in the other outing inflated his ERA to 4.76.  Pitchers could hide their weaknesses at Myrtle Beach the Carolina League.  The Cal League exposes every weakness and creates a few more for good measure.

Round Rock and Frisco play pretty close to neutral, although in both cases, the extremely unbalanced schedule makes calculating "neutral" tricky.  The Hickory Crawdads might not have broken the league HR record in 2013 had they played half of their games in Savannah.

I'll try to provide context for player performance throughout the season.

Although baseball is ultimately a meritocracy, in the minors it’s (again) all about development.  Sometimes, the adjustment process causes players to falter in the short run.  For example, back in 2015, the poor plate discipline of Nick Williams was mercilessly exposed upon promotion to AA.  The next year, he improved dramatically, becoming a top 100 prospect and a major piece of the Cole Hamels trade.  Management will wait patiently for performance if the tools are there.

Players are trying new pitches, adjusting their swings, and adapting to instructions that render statistics meaningless in the short run.  For example, a pitcher could be struggling to master his changeup, and he might be commanded to throw it in uncomfortable situations, and he’ll suffer the consequences.  I might see or hear about this and mention it.  (I'm hoping to see and mention a heavy dose of changes and curves from Chi Chi.) Often, especially at the lower levels, we won’t know until after the fact, if at all, so I try to be cautious about short-term failures.

Whatever you think the variance in statistical performance is, it's probably higher.  Don't overemphasize slumps and streaks.  Most of the time it’s just statistical noise.  Over the course of 30 at-bats, a proven .300 hitter has a one-in-six chance of batting .200 or worse and the same chance at .400 or better.  Every player in baseball will enjoy (or suffer through) an off-the-chart two-week stretch at some point of the season.  Somebody you like will be batting .170 at the end of April.  It might be something, but probably not.  Last year, Hanser Alberto batted .235 in April, then .357 in May.  Opponents slugged .482 against Ariel Jurado in April, then .230 in May.

I receive more questions about promotions in April than June.  That's fine -- I don't mind questions -- but understand that management didn't assign the players at whim.  Texas isn't going to promote Yeyson Yrizarri to High Desert if he bats .300 with five homers in April.  More than most organizations, Texas tends to assign players aggressively in April and then keep them there for long stretches.

I never badmouth a player unless I personally see or hear something that truly warrants it.  The "failed prospects" stuck in AAA are still some of the best hitters and pitchers on the planet.  I wonder how well some of us would respond to having our careers scrutinized so publicly. Imagine a horde of dubiously informed observers calling you a failure at 23.

At the same time, the cold truth is that not everyone's a prospect, and most aren't going to make it.  I'll give credit to anyone who does well on a particular day, but as you'll see, I focus on the guys who are more likely to help the Rangers someday.  There's only one of me, and this isn't my full-time job.

Which statistics are meaningful and which you should ignore.