The Braves have announced via twitter an affiliation with the Carolina Mudcats, leaving Texas and the California League's High Desert Mavericks as the only teams without a dance partner.  Neither the Rangers nor Mavericks have made an announcement, but one should be forthcoming after they sign the papers.  Meet Texas's new high-A destination:

In "The Call of Cthulhu," H.P. Lovecraft described his sunken city of R'lyeh as "abnormal, non-Euclidian, and loathsomely redolent of spheres and dimensions apart from ours." This fairly describes High Desert, which along with Houston-affiliated Lancaster is baseball's most hitter-friendly park.  I am pointedly not intending to disparage the front office or other people there, but the truth is that the Rangers are affiliating with the Mavericks only because they have no alternative.  Even Bakersfield is taken (by Seattle, which departed High Desert after eight seasons).

High Desert is located in Adelanto, California, about 80 miles northeast of Los Angeles across the San Gabriel Mountains.  Adelanto itself has only 32,000 people but is near the larger Victorville and Hesperia.  A burger joint and gas station constitute the only contiguous developments.  In the vicinity are several industrial properties, two prisons, and a stretch of the original Route 66.

The location is peculiar, shall we say.

The park, rechristened Heritage Field at Stater Bros. Stadium, was constructed by the city in 1990.  Only four years later, the Mavericks endured a season as a "co-op" team when the Marlins departed for Florida, and the Rangers will be the eighth tenant in 25 years.  Seattle accepted a deal with Bakersfield and the decades-long siren song of a new stadium.  Along with Bakersfield, High Desert was considered for relocation into the Carolina League in 2008, but nothing came of it.  Per his bio, owner Dave Heller has renovated the clubhouses and other parts of the complex since purchasing the team in 2011 from the Brett brothers, who own Spokane.  The stadium predates the new wave of lavish facilities but serves its purpose adequately, as far as I know.  It's certainly far superior to Bakersfield.  From what I've read, entertainment diversions in the park are limited, so fans tend to focus on the game itself.  I find that appealing, personally.

The problem isn't the physical plant per se but its environment.  The California League strongly promotes offense on the whole, and High Desert is usually the most hitter-friendly park in that league.  The park is 2,900 feet above sea level, and the wind typically blows toward the outfield.  In the past 18 years, its teams have led the league in homers 11 times and slugging eight times.  In 2014's home games, the average score was 9.0 to 5.0.  Yes, the losing team averaged five runs per game at Heritage Field this season.

Here are the 2014 differences in park-adjusted league averages between High Desert and Myrtle Beach:

I translated Myrtle Beach's individual and team stats to High Desert.  I'm confident of my math, but in many respects, the numbers are unnatural and disquieting (thus the Lovecraft reference).  The Pelicans, who had the Carolina League's best offense in 2014, would bat .292/.365/.513 and score 928 runs (6.7 per game).

The translated home run rate for High Desert is nearly double that of Myrtle Beach: +61% for the league, another 21% for the parks. Also, players bat about 5% more often in the Cal League because they're making fewer outs per plate appearance.

By these calculations, Joey Gallo as a High Desert Maverick would bat .364/.494/1.099 with 43 homers in 59 games.  Jorge Alfaro, Nick Williams, Preston Beck and Christopher Bostick all exceed 20 homers, and the team tallies 236, which I believe would set the league record.  Now, I doubt Gallo would really hit homers at that rate; it would entail 72% of his fly balls leaving the yard, and opponents would have completely stopped challenging him.  But, at least on a team level, the translated runs and slash stats aren't completely beyond the pale.

As for the pitchers, well, to paraphrase Colonel Walter E. Kurtz, they're going to have to make a friend of horror.  The team ERA would leap from 3.43 to 4.79.  Andrew Faulker and Chi Chi Gonzalez don't suffer too badly, with translated ERAs of 2.89 and 3.66, respectively, but Sam Wolff jumps from 3.37 to 4.71.  Understand that even a 5.00 ERA is good in High Desert, about 7% better than average.

During their affiliation with Bakersfield, the Rangers sometimes assigned its best pitching prospects there as briefly as possible or not at all.  Martin Perez and Neftali Feliz skipped the level entirely.  Derek Holland made five starts, Tommy Hunter nine, Blake Beavan 12.  Transferring players between high-A and low-A has just become an all-day, cross-country chore.

One upside to High Desert is very limited travel within the league, which plays a very unbalanced schedule.  High Desert's four division opponents are within 40-80 miles.

One of my tasks at the Newberg Report is to provide context the stats, to tell you what matters and what to ignore.  Whenever Round Rock visits Reno or some other high-octane city, I typically shrug off the results and explain why.  Now, Texas fields a team that will play half of its games in a Reno-like setting.  How do I contextualize this?

Unfortunately, to some extent, my suggestion would be to ignore everything.  Variance will be atrocious.  A couple of bad or unlucky outings will blow up some poor pitcher's ERA for the whole season.  A pitcher isn't supposed to nibble, as a rule, but can you blame him when the wind is blowing out to center at 20 MPH and the score is 12-8 in the 5th?  I can translate numbers in Excel all day, but what matters is how the players adapt.  Pitchers will have to keep the ball down and learn to accept that some will reach the bleachers no matter what they do, and non-Gallo hitters will need to avoid the trap of thinking they're the next Joey Gallo.

Even irrespective of the statistics, my coverage will suffer.  High Desert doesn't show its games on MiLB.tv, and the only Cal League team who does is San Jose, whom the Mavericks rarely visit.

So, All That Said, Did the Rangers Screw Up?

I don't know.  I wasn't privy to any negotiations.  My gut feel is no; High-A has presented a special challenge to the Rangers ever since they moved operations to Arizona, for several reasons:

1) All 30 high-A teams are squashed into three compact geographical areas (in orange on the map below) far removed from Texas. 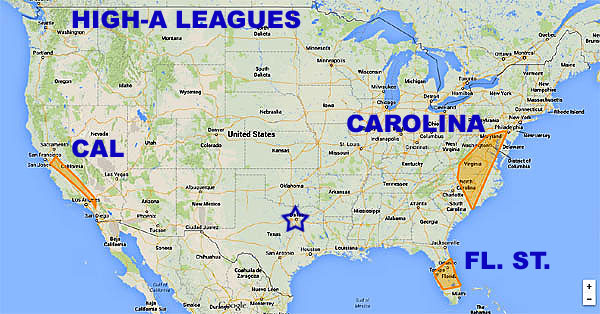 2) Eight of the twelve Florida State League teams are owned by their MLB parents, and two privately owned teams play in stadiums within an MLB club's spring training complex.

3) The Cal League has several very hitter-friendly parks.  Also, their teams understandably prefer to affiliate with California-based MLB clubs (with Arizona or Colorado as runners up), leaving the least desirable teams to affiliate with MLB clubs outside the state.

4) The Carolina League is preferable for its proximity to low-A Hickory and its neutral playing environment, but two of the eight teams are parent-owned and two others have strong geographic ties to their parents.  This leaves just four potential homes for the Rangers: Myrtle Beach, Carolina, Lynchburg and Wilmington, the last of which has affiliated with Kansas City for all but two of the last 22 years.  The Cubs' relocation to Myrtle Beach after 22 years in Daytona of the Florida State League presents yet another obstacle.

So, only a handful of high-A teams are genuinely in play every two years, and the Rangers lack strong ties to any of them.  The similarly situated Astros have affiliated with the Cal League's Lancaster, a well-supported club in a nice but hideously hitter-friendly park, for the past six years (with at least two more to come).

The Rangers can't solve this problem by plunking a self-created team into a park in Texas.  Doing so would put an existing team out of business, which I suspect violates a rule or two, and a Texas-located team would be one thousand miles from its nearest opponent.  Creating a team or moving one to Texas would require dissolution and relocation of an entire league.  That's not happening.  Not in 2014, anyway.

How about avoiding the level altogether?  Sorry.  While some clubs choose not to field rookie-level or short-season teams, everybody has to provide four full-season teams including high-A.

Plenty can change in two years -- witness the seismic shift in the AAA Pacific Coast League -- but as it stands, I'd guess fewer than half of these sixteen teams will truly be on the market, and fewer still might be available to Texas.  If I had to put $100 on which league will host Texas in 2017-2018, I'd pick the Cal League.

Unless… In 2008, the Red Sox purchased the Carolina League's Salem Avalanche to escape Lancaster.  Might the Rangers buy a team, too?  I'm sure the idea has crossed the minds of some front office folks.