Eight-year-old me was mesmerized by this 1977 Topps baseball card. 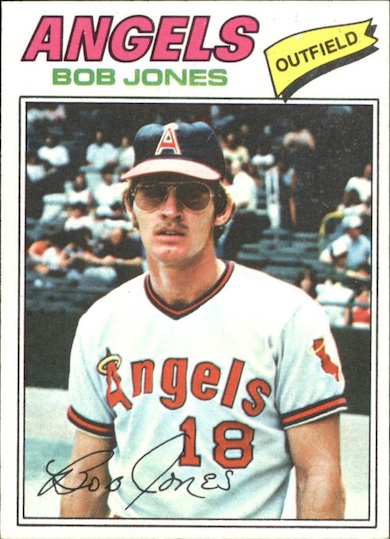 The most ordinary name possible.

Sixteen at-bats as a Texas Ranger that I had zero recollection of.

And that note on the back of the card, a third of the way down. 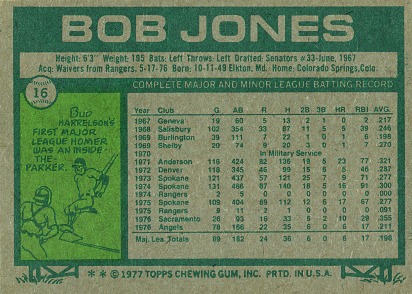 As a naïve second-grade kid, I didn’t know what to make of that.  I think I might have known by that age that Williams and DiMaggio and Feller had missed time serving their country back when my Dad was a kid.

But a player serving during my lifetime?

Later on I’d realize another really cool distinction about that baseball card.

I think it’s the only one Bobby Jones was ever on when he wasn’t a member of the Texas Rangers organization.

Which is not to say he was a household name among Rangers fans.

Not the Philadelphia 76er.

Not, eventually, the Mets righty or the Rockies lefty or the Cowboys middle linebacker (who stuck with “Robert”).

From 1967 through 1974, Jones — a 36th-round draft pick out of a Maryland high school — toiled in the minor leagues for the Washington Senators and Rangers.  In fact, he’d never gotten out of Class A in four Senators seasons, saving his best for last, as he hit .321/.392/.552 in 1971, with more playing time (478 plate appearances) than he’d ever had . . . and that came immediately after he’d spent December 1969 through February 1971 in Vietnam, where he earned a Bronze Star for meritorious achievement while engaged in conflict with an opposing foreign force.

Corporal Jones is deaf in one ear, residual damage from his work as section chief of a 105-millimeter howitzer group, in charge of a gun pit providing fire support for American infantrymen during a 14-month tour of duty that apparently included no more than eight days in which he didn’t see combat activity.

After that breakout 1971 season in Class A with the Senators, Jones was assigned to AAA in the Rangers’ inaugural 1972 season, and his numbers regressed.  He returned to AAA in 1973.  And in 1974.  A very good run that year with Spokane (.300/.389/.464) led Texas to reward Jones, in his eighth pro season, with a trip to the big leagues.  In the final series of the Rangers season, Jones got one start and one other appearance, going 0 for 5 with a strikeout.  He turned 25 a week later.

In the Rangers’ 1975 media guide, Jones was quoted to say: “I don’t get mad any more.  Over there (Vietnam) you never knew if you would see tomorrow.  Now I can shake off a bad day and look forward to a better day without worrying.”

And this note followed for the eight-year pro with five big league plate appearances: Jones “would like to get into the business end of baseball when he retires.”

Retirement was a good ways off.

In 1975 he played in AAA again, with two brief stints in Texas (including an infield single on July 29, the lone hit he’d pick up in 14 trips).

The Rangers gave Jones a fifth run at AAA in 1976 (this time in Sacramento), but even though he jumped out to a .355/.419/.774 start through a month and a half, the organization placed him on waivers in mid-May, after which he was claimed by the Angels.  He spent the rest of the year with California, hitting a quiet .211/.273/.355 and posing for that extraordinarily ordinary baseball card.

Jones split 1977 between AAA and the big leagues and was in AAA for all of 1978, after which he left the Angels for an opportunity to take his game to Japan.  He played his age 29 and age 30 seasons for the Chunichi Dragons, but then Texas gave him an offer to return stateside for another chance to compete for a big league role.

Jones put together a strong 1981 season in AAA (.315/.407/.545), earning a September call-up.  In his first game, in his first at-bat, he blasted a two-run homer and singled in a run off Jim Clancy in his two trips, accounting for all the Rangers’ offense in a 9-3 loss.  Jones would hit safely in seven of his 10 games before pulling a ribcage muscle, driving three balls out of the park, and he survived winter roster trimming and went to camp in 1982 on the 40-man roster.

But he never got out of AAA in 1982, and turning 33 that October you might have expected Jones to hang it up at that point, after a lengthy pro career that included 263 plate appearances spread over five big league seasons.

Instead, he would go on to pile up another 408 Major League trips to the plate.

The next spring (1988), he was managing the Rangers’ High Class A club in Port Charlotte.

His club finished first in the Florida State League’s first half standings that season, he won a league championship with the same team the following year, and he reached the playoffs again in 1990.

Jones then managed AA Tulsa for two seasons and AAA Oklahoma City for the two after that.  He returned to Tulsa for the next six seasons until he was summoned to Johnny Oates’s big league coaching staff in May 2000 (when first base coach Ed Napoleon retired).  He remained on the big league staff in 2001 under both Oates and Jerry Narron, and then returned to Oklahoma City to manage the AAA club from 2002 until 2005.

In 2006, Jones served as Buck Showalter’s first base coach and outfield instructor in Texas.

From 2007 through 2013, throughout the organization’s resurgence that began on the farm, Jones managed the Rangers’ AAA clubs in Oklahoma City and Round Rock, and then served as big league assistant hitting coach for Ron Washington and Jeff Banister in 2014 and 2015 (and bench coach for Tim Bogar in his stint as interim manager in September 2014).

He’ll be the Rangers’ video replay coordinator in 2016.

And then, after 50 years in pro baseball, Bobby Jones is going to retire.

In the Rangers organization’s 45 years of existence, they’ve had four without him in some sort of uniform.

He’s managed and won more games than anyone in the history of the Texas farm system.  Twelve of his 24 minor league teams reached the post-season.  He’s won several awards as a manager, including the inaugural presentation in 2008 of the Mike Coolbaugh Award, presented annually nationwide to an individual in Minor League Baseball for “outstanding work ethic, knowledge of the game, and skill in mentoring young players on the field.”  He was also the inaugural recipient, four years ago, of an award that the Rangers have named after him, the Bobby Jones Player Development Man of the Year.

On September 11, 2014, Jones was recognized on a much different level.

In a pregame Patriot Day ceremony before a late-season game between the Rangers and Angels (the two clubs Jones had played for), the Rangers arranged to have the U.S. Army formally present Jones with his Bronze Star Medal and citation, something that had never been done since he earned them 43 years earlier.  It happened on the baseball field, on a night when more than 27,000 were on hand and cheering far more loudly than Corporal Jones could sense.

The following year would be the first Bobby Jones ever got the chance to suit up for a big league playoff game.

I don’t know whether replay coordinators put on a uniform.  If they don’t, Jones will have finished his career in uniform in a Major League playoff series, after 48 years without one.

Of course, I’m optimistic that there’s one more run of October baseball in Jones’s career, uniform or not.

And one more on-field ceremony.

He played with Gaylord Perry and Ruben Sierra.

And Rusty Greer, who says of his third professional manager, skipper of five different teams Greer would suit up for: “Bobby was a great player’s manager.  He kept the game loose but professional, and expected nothing but the best from his players — though he understood his guys weren’t going to be perfect all the time.  His focus was on making players better and getting them to the big leagues.

“Bobby Jones sent me to the big leagues and he will always hold a special place in my heart.”

Mike Bacsik says of Jones, who managed him in Oklahoma City and had also been teammates with his father: “He treated us like Major Leaguers.  Kept us loose but made sure we played hard and respected the game.”

Kameron Loe, who by my rough count has had 25 managers at the pro level: “Bobby was definitely the easiest manager I ever played for, and the most fun.  He created a relaxed atmosphere while still having a very apparent desire to win.  He treated guys with respect and he definitely got that respect back.”

(Loe also tells a story that you’ll understand, if you’ve been around Bobby Jones enough, wouldn’t make it through your email filter if I recounted it uncensored.  [Although Jones served in the Army, he has one of the great sailor’s mouths in baseball.]  The story involves a hanging slider that Loe served up in AAA, resulting in a three-run bomb and a lead change, after which Jones asked Loe to show him the grip he used on the slider . . . issued a memorable, wordy, NSFW commentary on the grip and then a suggestion on whether Loe should ever hold the ball that way again . . . laughed . . . and walked away . . . still laughing.)

Jones is the kind of guy who says he has the ability, given his life experience, to shake off a bad day, but fails to admit he probably has very few of those to begin with.

His was a playing career marked on one hand by its lack of distinction, on another by its remarkable chronology.

In nine big league seasons, spanning 13 years, Jones would rack up a total of 671 plate appearances.

There were 23 players in the big leagues who had more in 2015 alone.

But in so many phases in this game, a new one of which will be added to the ledger this year, Jones has made his mark.

He’s done one helluva lot, in the game and outside of it, building an extraordinary 50-year story wholly unimaginable through the prism of a seemingly unexceptional baseball card, bearing the most common of names and unremarkable of poses and one seriously outstanding pair of aviator shades.